Astrological considerations on a Pandemic

The WHO declared that the COVID-19 virus outbreak was a pandemic at 5.16pm on Wednesday 11th March 2020, at Geneva in Switzerland.

The Matter at Hand
With Virgo on the Ascendant, Mercury is the ruler of this chart – an interesting start, given that Virgo traditionally rules matters of health and that Mercury is the planetary representation of the caduceus, which symbolises the medical profession.  Mercury is to be found in the Sixth House, again clearly associating this event with matters of health and illness.  Moreover, Mercury is in Aquarius, an Air sign, which reflects the dispersive and international nature of this viral contagion.

Mercury is located within about half a degree of orb of the Fixed Star Gienah at 27°45 Aquarius – which is given to mean: Soar to great heights, potential of sudden downfall.

Luxury Travel
The only two significant aspects that Mercury makes are to Uranus in the 9th House and to the Moon in the 2nd House.  Uranus is conjunct Venus in Taurus in the house of travel and journeys, so the Virus (Mercury) is going to be disruptive (Uranus) to luxury travel (Venus/Taurus in 9th) in particular.  All aeroplane travel can readily be seen as a luxury rather than a necessity; but it is striking how many incidents of CV19 have occurred on Cruise Ships, many of which have been banned from coming into port to prevent disembarkation.  The global tourist industry, luxury hotels and resorts and cruise ships are all going to fare very badly from this pandemic.

The Disease itself
The Moon governs mucal fluids and the 2nd house rules the throat, through association with Taurus.  But it’s the trine aspects to the stellium in Capricorn which is the most revealing about the nature of the disease itself: the disease is airborne (Jupiter), and brings fever (Mars), death (Pluto) and isolation (Saturn).  One of the effects of the disease is to produce so much mucous that it causes fibrotic stiffening (Saturn) of the airways in the lungs.

It is interesting that the Moon is to be found in the via combusta, traditionally said to mean a warning, foretelling of difficulty or trouble ahead.

Recreational Activities
We have already seen that the tourist industry is going to be very disrupted by this virus, but with the stellium of planets in the 5th House, the other major area of life that is going to be plunged into disarray is the sports, movies, music and entertainment industries.  Socialising and recreational activities are going to be severely affected by the virus.  It’s interesting that one of the effects of having Saturn in the 5th House is increased caution about interacting with others and withdrawing from others socially.  The ‘social distancing’ we are being asked to enact is like putting a ‘wall’ (Saturn) around us.

Of course, the Moon’s placement in the 2nd House also puts much emphasis on the economy, money, food supply and possessions.  The four planets in the stellium trining the Moon show that these areas of life are going to be severely challenged whilst the virus runs its course.

What do we Value ?
However, I think we need to consider the significance of the 2nd House in the broader terms of its significance as a descriptor of what we value.  Where do we place value?  How much value do we attach to material things and possessions?  What are our values?  The opportunity that this virus presents is that of allowing us to re-examine what is important to us, what it is that we value?

In addition to that, the Sun is conjunct Neptune in the 7th House – and also in aspect (by Sextile) to the stellium in Capricorn – suggesting that the other primary issue we need to focus on is our relationships with others (7th House).  How is the integrity of our relationships? Is there some deceit and lack of clarity there?  Or are our relationships working in accordance with some higher spiritual harmony (Neptune)?

What’s Next?
The moon has to aspect Jupiter, Pluto, Mercury and Saturn before it passes out of Libra suggesting that the illness will spread far and wide (Jupiter), cause many deaths (Pluto), globalised news stories (Mercury in Aquarius) constraints and limitations especially with regard to the freedom of people to congregate. (Saturn).  Saturn goes into Aquarius as of 21st March, also indicating curtailment of freedom of movement, the closing of borders and the isolation of both countries and peoples.

It  also suggests that we need to look at how to take collective responsibility for what’s going on here. 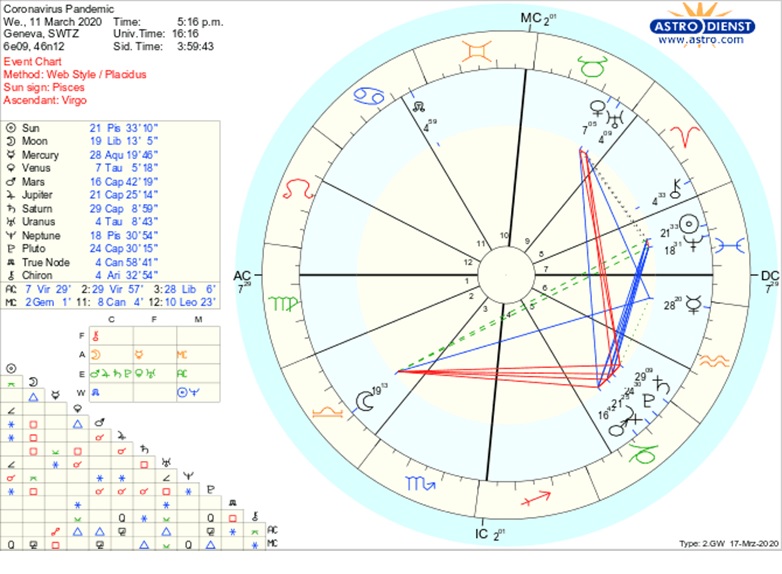