There are two really distinctive features to be seen in Michelle Obama’s right hand, a long Ring Finger and a Doubled Major Water Line. These distinctive hand features are, therefore, decidedly characteristic…….

The first is the evident fact that her Ring Finger (Fire finger) is longer than her Index Finger (Water finger). This is commonly seen in the hands of actors and although it is not especially uncommon to see one of these two fingers longer than the other, here the Ring Finger is much longer than the Index Finger. The ring finger relates to a person’s self-expression, their public image, their persona. It shows how you express yourself in public, how well you dress, how concerned about your image you are, how concerned you are with what other people think of you.

Long ring-fingered people like to look good and like to project a strong, carefully artificed image to others. They are usually fashion conscious and always concerned to make a strong appearance and make a good impression. An ability to handle media attention and being in the spotlight is shown here. The longer this finger is (in relation to the Index finger) the more this characteristic is pronounced. Here, therefore, we have someone who is very concerned with their image and how they come across to others. People with long Ring Fingers have an actor’s temperament – they need to be seen and they need an audience. Being liked, being popular is very important to such a person.

However, what is more unusual is the doubling of the Major Water line (Heart Line), to be seen under the fingers themselves. Whilst it is not uncommon for there to be an overlapping line formation at the end of the Major Water line, it is extremely rare to see the line doubled along almost its entire length.

Having a secondary line such as this is, again, a hand feature that has connotations of the actor. We call this line formation the “Persona Line’, because people who have such a line typically wear a mask or a persona which with they interact with the world. It’s like they are somehow split – there is a strong idealism within the person, with a vision or dream of how they should like to be (the upper line) which is contrasted with how they actually are (the lower part of the line). Of course, this is a perfectly acceptable schism for a professional actor, where they take on the mantle of being another person and act it out on stage or screen; yet they are, all the time, aware that the role they are projecting (upper line) is not who they are really (lower line). They retain the ability to differentiate the actor from the character they are playing.

In a case such as in this hand, where the person concerned is not a professional actor, then we find that this line formation denotes a psychological schism,a separation between the act and the actor, between the thinker and the thought, often such that the person comes to believe that the imaged version of themselves they have created is, indeed, who they ‘really are’. They come to believe their own hype, they come to believe the image of themselves that they have created as being true. They forget that they are ‘dressing up’ and, as a result, get quite out of touch with their true emotions and responses. This can be the result of a deep seated lack of self-acceptance. This whole line formation then becomes a means of self-protection to avoid engagement and interaction with others. The mask that they wear is a front to cover up to themselves and others that which they find unacceptable within themselves. It is, therefore, unusual for them to find happenis.

Because their true motives and feelings are masked and hidden away, you really do not know what is going on with these people at all. At the very least you can sense that there is something duplicitous going on, that you are being lied to in some way, but sometimes it can be quite difficult to discern quite what. To give some examples, there was a famous UK TV Personality known for being very conventional who was discovered in later years to have led a bigamous life and been married to two different women for over twenty years! Another less salubrious example is the notorious paedophile Jimmy Saville, who was able to project a persona of being a ‘Good Samaritan’ by raising 40 million pounds for hospitals to cover up his heinous deeds for over forty years. I have seen such a line formation in the hands of people undergoing gender re-assignment surgery and have even seen it in the hands of an acclaimed Buddhist teacher who was exposed for being a serial sexual abuser. It is like a game for these people, to play a part in life such that everyone else doesn’t find out who they ‘really’ are and don’t catch on to the ‘real’ person that lies beneath.

The mask these people wear therefore serves as a means by which they may keep hidden from others. Michelle Obama would rather remain aloof and unknown, enigmatic and unexposed. In fact, her greatest fears lie within being exposed, revealed and unmasked. Michelle Obama therefore puts not an inconsiderable amount of time and energy into maintaining an image, a persona, a mask simply as a means to keep hidden and remain unknowable. 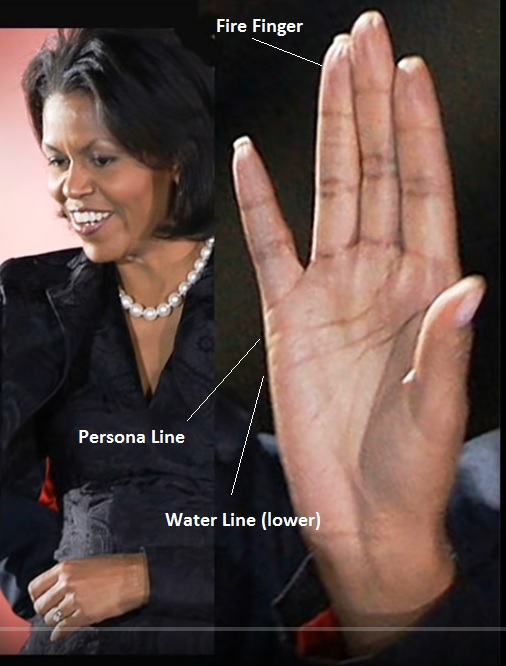